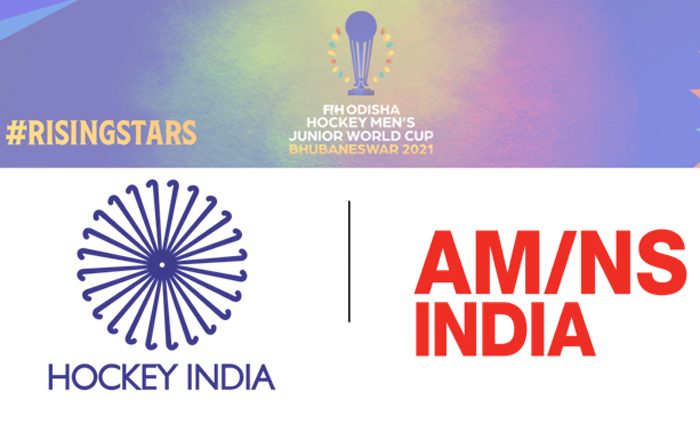 Tournament will see 16 leading teams from across the world, including defending Champions India, compete for the prestigious title

Bhubaneswar(Kalinga Voice) : ArcelorMittal Nippon Steel India (AM/NS India) – a joint venture between ArcelorMittal and Nippon Steel, and a leading steelmaker – was today announced as the Official Partner of the FIH Odisha Hockey Men’s Junior World Cup Bhubaneswar 2021. The tournament will be held from 24 November to 5 December 2021 at the iconic Kalinga Hockey Stadium in Bhubaneshwar, Odisha.

AM/NS India has signed an agreement in this regard with Hockey India, the country’s National Sports Hockey Federation, which leads the promotion of the sport across the country.

The marquee tournament in the International Hockey Federation (FIH) calendar marks the return of major international sports events in India after nearly two years due to the Covid-19 pandemic and sees India, which also hosted the last Men’s Junior Hockey World Cup in 2016, defend its title.

MR. DILIP OOMMEN, CHIEF EXECUTIVE OFFICER OF ARCELORMITTAL NIPPON STEEL INDIA, said: “As Odisha gears up to host the rising stars in the world of hockey, we are delighted to partner with Hockey India and support its efforts to bring fans and players across the globe closer to this important national sport. Odisha has become synonymous with the success of Indian hockey and it is one of the key states for AM/NS India, given our extensive operations’ presence here. We are proud to have this opportunity to support the development of hockey, which is also known for strength and agility. We wish Odisha and all the teams taking part in this global event the very best.”

MR. GYANENDRO NINGOMBAM, PRESIDENT OF HOCKEY INDIA, said, “We are pleased to have ArcelorMittal Nippon Steel India as the Official Partner for the much-awaited FIH Odisha Hockey Men’s Junior World Cup Bhubaneswar 2021. We are excited that India is once again the host to international sporting events.  The biggest gainers from AM/NS India’s support are the sport of hockey itself, and more importantly the talented players who will be taking part in the tournament. I would like to thank the AM/NS India team for coming forward to support the sport of hockey in the best way possible.”