DEVELOPMENT NEEDS TO BE REGULATED TO SAVE ENVIRONMENT: JUSTICE STHALEKAR 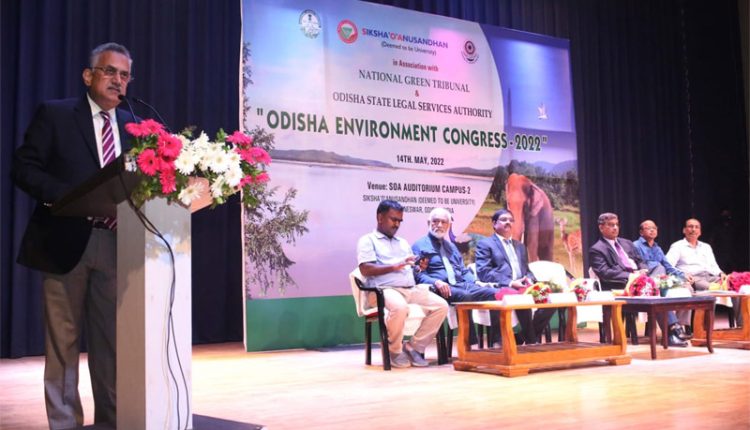 Bhubaneswar: With the earth’s temperature slated to rise by 1.5 degrees C by 2025 amidst environmental degradation and increasing pollution, all efforts need to be made to protect the environment by desisting from activities which has led to the present situation, Mr. Justice B. Amit Sthalekar, Judicial Member of the National Green Tribunal (NGT), Kolkata, said on Saturday.
“If the earth’s temperature goes up with no effort to contain it, it will trigger the melting of glaciers around the world causing the sea level to rise and inundate coastal areas including cities like Mumbai and Kolkata,” Mr. Justice Sthalekar said while speaking at the Odisha Environment Congress-2022 held at Siksha ‘O’ Anusandhan (SOA) in association with NGT and Odisha State Legal Services Authority.
Pointing out that development was taking place at the cost of environment he said NGT had directed action against construction of resorts on the sea shore in violation of the Coastal Regulation Zone (CRZ).
“Such construction was taking place right on the beach though the CRZ rules don’t allow any activity within 500 metres of the High Tide Line. It causes the beach to narrow down and makes the sea deep in that area which leads to the destruction of the beach itself,” Mr. Justice Sthalekar, who was the chief guest on the occasion, said.
“You cannot play with environment,” he told the large number of students attending the event, adding “be alive, alert and aware about the degradation of environment taking place around us.”

Mr. Saibal Dasgupta, Expert Member, National Green Tribunal, Kolkata, attended the program as the chief guest and keynote speaker.
Expressing dismay over the rampant use of plastic and polythene, Mr. Justice Sthalekar said he was of the view that the use of such substances, which don’t degrade for 400 years and destroy the soil, should be completely stopped.
“The ill-effects of modernism has been hitting us badly as use of earthen ‘kullads’ has been completely forgotten,” he said saying there was a need to go back to the era when grocery items were delivered in paper bags.
“If we return to earthen kullads, it would not only generate employment but also help us to go back to nature,” Mr. Justice Sthalekar said adding “when we hurt nature, it will hit us back.”
Mr. Dasgupta said 52.90 million tonnes of solid waste was generated in the country annually of which plastic waste alone accounted for 5.6 million tonne. “About 78 per cent of this waste was collected of which only 25 per cent was prcessed,” he said adding NGT was strictly enforcing the rules.
Amidst the gloomy scenario, the good news was that India was among ten countries which had large forest cover accounting for 24.6 per cent of the total land mass with the dense forest area spread across 99,779 sq km, Mr. Dasgupta said. The forest cover in Odisha, he said, had increased by 537 sq km which was heartening. Addressing the students, Mr. Dasgupta said it was up to them to work as watchdogs to save the environment.
Prof. Pradipta Kumar Nanda, Pro-Vice Chancellor of SOA, presided over the
program which was also addressed by Prof. Prabir Kumar Patnaik, Professor in SOA’s faculty of legal studies, Prof. Basudeb Behera, Professor in the faculty of agricultural sciences and Prof. Aditya Kishore Das, Professor in the faculty of engineering and technology. Prof. Jyoti Ranjan Das, Dean (Students’ Welfare) conducted the program.

India Country Consultation on Elimination of Child Labour by 2025