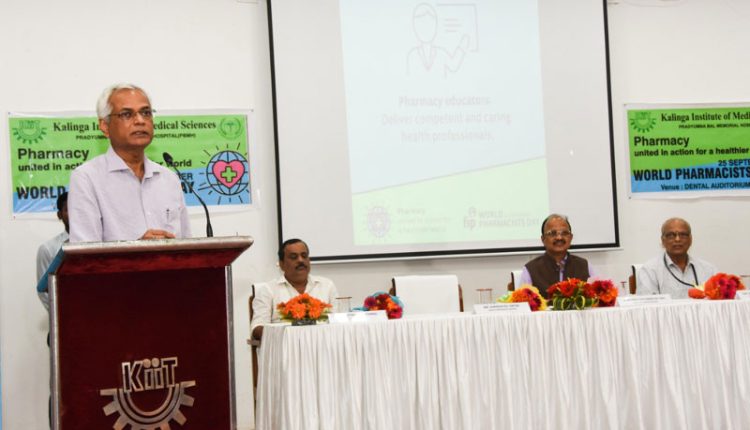 Bhubaneswar: The School of Pharmacy under the KIIT Group of Institutes will start functioning from the next academic session and offer courses in B.Pharm and D.Pharm. This was disclosed during the World Pharmacists Day 2022 celebration held at the KIMS Campus.

Drugs Controller of Odisha Subodh Kumar Nayak, who attended the event as Chief Guest on Sept 25, called upon the pharmacist across the State to keep the interest of the consumers above everything else. He said that they will adopt zero tolerance towards spurious drugs in light of the Odisha Police arresting two persons from Bihar on charges of supplying fake drugs.

“For unscrupulous greed of some people, we have earned a bad name,” he said, requesting the pharmacist to procure their stocks from the regular channels.

He hailed the role of the pharmacist during the COVID pandemic and said people repose their trust and faith in the pharmacist as much as in the doctors.

Mr Nayak lauded the efforts of KIIT, KISS and KIMS Founder Dr AchyutaSamanta for recruiting over 300 pharmacists at KIMS and said the upcoming School of Pharmacy will significantly change the pharmacy landscape of Odisha.

The Pharmacy Council of India, he informed, will conduct an ‘Exit’ exam first time for pharmacy students to secure the license for retail drug sales.

KIMS Medical Superintendent Prof R C Das said the role of the pharmacist has gone beyond retail sales to research activities in developing new solutions and medicines. Pharmacist, he said, is the first line of contact for people and patients in the interiors of Odisha.

“Even our Founder Dr Samanta, reaches out to Director of Administration School of Medicine Dillip Kumar Panda, a pharmacist himself when he has to seek medication. This shows the trust and faith the pharmacist enjoys in the society,” he said.

GM KIMS Pharmacy Chitta Ranjan Samalinformed the gathering that the School of Pharmacy will start with B.Pharm and D.Pharm courses in the coming academic session and approval in this regard is awaited from the Pharmacy Council.

The World Pharmacists Day is observed to achieve an overall aim of universal health coverage with a major focus on pharmaceutical science, practice and education,’’ said Mr Panda.

for a healthier world”. It means showcasing pharmacists’ role in creating a positive change in the world and further strengthening the unity among people in the profession.