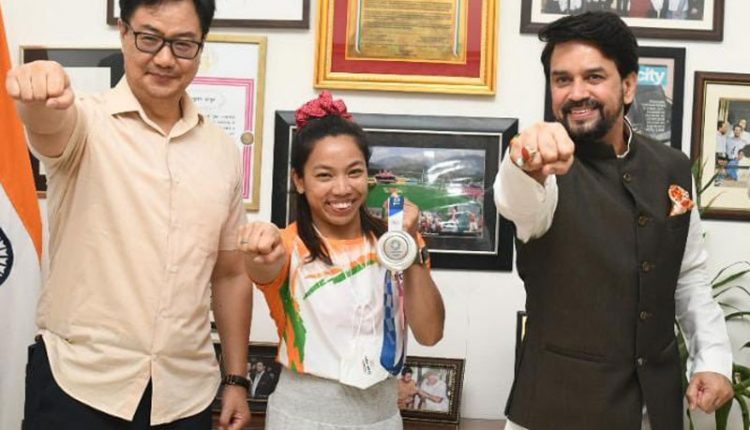 New Delhi/ Kalinga Voice: India’s first medal winner at the Tokyo Olympics Saikhom Mirabai Chanu and her coach Vijay Sharma returned to the country this evening and were given a hero’s welcome and was felicitated by Union Sports Minister Shri Anurag Singh Thakur at his residence. Union Minister for Law and Justice Minister Shri Kiren Rijiju and Union Minister for Tourism, Culture and Development of North-Eastern region Shri Kishan Reddy, Union Minister of Ports, Shipping and Waterways & Minister for AYUSH, Sh Sarbananda Sonowal and Minister of State for Youth Affairs and Sports, Shri Nisith Pramanik were also present.

This was the first time Chanu who won a silver medal in women’s 49 kg weightlifting had come to India, after flying out to the USA on May 1 for a stint with renowned strength and conditioning coach Dr. Aaron Horschig. The government had swiftly arranged for Chanu to fly out at short notice with a travel ban to the USA for people coming from India set to be imposed within a few days due to the surge in Covid-19 cases.

An overjoyed Chanu said, “This is a dream come true for me. I have been training for this moment for years and I am glad that it all came right for me at the biggest stage of them all, the Olympic Games.” Chanu also thanked the government for extending timely support over the years and particularly the two trips to USA, last year and the most recent one. “The trip to USA last year to address issues related to my shoulder was instrumental in my journey to this medal. I am grateful for all the support extended by the government towards me, without which this journey to an Olympic medal would not have been possible. I would also like to say that the ‘Target Olympic Podium Scheme (TOPS) had boosted my career and medal prospects.”

Shri Anurag Singh Thakur congratulated Chanu saying, “Mirabai Chanu’s victory is the victory of 130 crore Indians, who were filled with pride when India’s flag was unfurled and national anthem played at the medal ceremony in Tokyo. It’s the first time in Olympic history that an Indian has won a medal on the opening day. Her success also shows how the TOPS program has played a crucial role in boosting the development of our athletes and India’s medal hopes. Modi government will continue to nurture sporting talent and provide them every facility to achieve excellence at the highest level. Her performance has caught the imagination of the entire nation. She will inspire a generation of athletes, even more from the north east.”

Union Minister of Law and Justice Shri. Kiren Rijiju said before leaving for Tokyo when we spoke, she had promised that she will bring a medal for the country, and true to her words, she has delivered on her promise. Like every Indian, I am elated and proud of this prestigious achivement. The glory and honour that she has brought to India is the result of years of perseverance, dedication and extreme hardwork, and she deserves every bit of the adulation she is being showered on her.

Union Minister Shri Kishan Reddy said, “It fills my heart with pride to see our daughters making Maa Bharti proud. Standing on the pedestal, wearing the silver medallion around her neck, Mirabai has won the hearts of every Indian. Her journey to success stands as an inspiration not just for the sports fraternity but also for every youngster with dreams and goals. I wish to take this opportunity to place on record the enthusiasm for sports and fitness activities in the North East states and I am glad that this active sporting culture is bringing laurels to India.”

Union Minister Shri Sarbananda Sonowal congratulated Mirabai on her achievement and said that you have inspired the nation and we all are proud of you.

Shri Pramanik too had words of praise for the champion weightlifter, “This medal is the result of years of hard work and preparation. It was a matter of pride for 135 crore Indians as they saw you execute your lifts on the big stage and win a medal. This is the icing on the cake in your glorious journey but I am sure that you won’t be stopping here. All my and the country’s blessings so that you can win more medals in the years to come.”