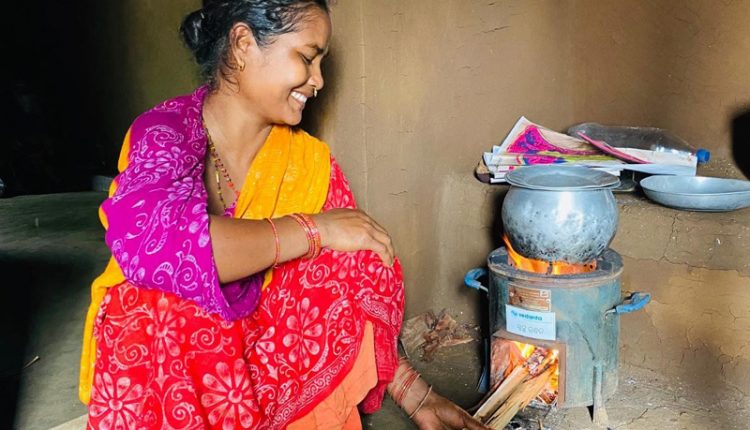 850 households across 25 villages have been covered under the clean lighting initiative, and 100 households from 6 villages have made the switch to fuel-efficient chulhas. The initiative has reduced CO2 emissions from these activities by more than 6 lakh kgs.

The identified 25 villages in Kalahandi district are very remote and had no or unreliable electricity, which made carrying out household chores and studying at night almost impossible for women and children. They had to rely on kerosene lamps, with each household consuming nearly 2 litres of kerosene every month, which emitted a lot of smoke and posed many health hazards. The shift to solar lamps benefitted children and women the most, as it provided extra 3-4 hours of study time post-sunset and more time for women to complete household chores in the night. Besides aiding in the conservation of green cover, the initiative has reduced respiratory risks for women and children by reducing indoor pollution. It also increased income oflocal shopkeepers, by allowing them to operate late into the evenings and at night.

Earlier, the local communities relied on traditional chulhas for cooking, which resulted in more firewood consumption and more smoke. A single household used to consume as much as 200 kgs of firewood each month, discharging ~380 kgs of CO2 per month. The transition to the fuel-efficient cooking stove in these households is expected to reduce CO2 emission by at least half, and mitigate health risks for women, who were severely affected by  smoke inhalation to breathe easy.

Speaking about this initiative, Mr. GG Pal, Dy. CEO – Alumina Business, Vedanta Ltd., said, “Through our community development initiatives, we are working to improve the quality of life of our local communities. We are working with the locals to replace kerosene lamps with solar lamps and traditional chulhas with fuel-efficient ones, to bring about a significant improvement to their health and transformation in their ways of life.With the primary objective of providing basic amenities and ensuring better health, we are also reducing  carbon footprint through various economically viable ways.”

Kudunji Majhi, resident of Belamba village, who has a solar lamp and fuel efficient chulha at her house adds, “Earlier my kids had to depend on kerosene lamps to study in the evening hours due to erratic electricity supply. Thanks to Vedanta’s intervention, we now have a solar lamp which not only helps my children study for longer hours in the evening, but also helps me do my household work easily at night.”

Vedanta is the largest producer of aluminium in India and remains the premier manufacturer of metallurgical grade alumina. The company operates a 2 MTPA (million tonnes per annum) capacity alumina refinery in Lanjigarh (Kalahandi district, Odisha), India since 2007 and an associated 90 MW captive power plant. With its world-class Aluminium Smelters, Alumina Refinery and Power Plants in India, the company fulfils its mission of spurring emerging applications of aluminium as the ‘Metal of the Future’ for a greener tomorrow.

PURI-PATNA SPECIAL EXTENDED TO RUN FOR ONE MORE MONTH