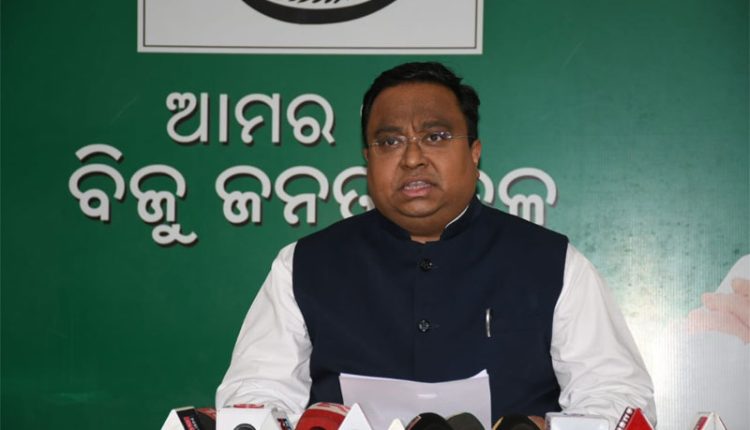 “Falsehood of the Centre on the FasalBima has been caught by the farmers of Padampur and Odisha.”

Addressing a press meet, Dr Patra said ” Yesterday, BJD had asked three specific questions. First, whether Centre empanels the insurance company like HDFC or not. Answer is that Centre does it. Second, whether BJP ruled states like Uttar Pradesh, Madhya Pradesh, Himachal Pradesh, Karnataka, Assam, Tripura and Maharashtra are also using the said irregularity driven HDFC company. Answer is that these BJP-ruled states do use it. Thirdly, with reference to yesterday’s letter and meeting of Hon’ble Union Minister Shri. Dharmendra Pradhan with Hon’ble Union Minister Agriculture Shri. Tomar that whether citing his letter, PM FasalBima Yojana is no longer a clean programme and has irregularities. Answer- the Centre has been caught on a wrong foot on this. They cannot admit that their PMFBY is running through collusion and corruption by one of their empanelled insurance companies.

Today’s letter by Hon’ble Union Minister Agriculture is actually a well-thought diversionary tactic to shift the attention from the above these questions, the answers of which the Centre would like to hide from the farmers of Padampur and Odisha.”

Dr Patra further said ” This letter of the Union Minister is flawed, faulty and is based on distored facts and half-truths. Let us answer how. The fact that Hon’ble CM Shri. Naveen Patnaik had written to the Hon’ble Union Agriculture Minister on 29th August, 2022 demanding that the Centre release the FasalBima Funds to the farmers of Odisha has been hidden and does not find mention. Why? Is it becaujse the Centre wants to hide the fact that the Hon’ble odisha CM had been regularly putting pressure on the Centre for the Fasal Bima?

Second, the fact that Odisha’s Cooperation Minister Shri. AtanuSabyasachi Nayak met the Hon’ble Union Minister on 9th November, 2022 regarding payment of FasalBima Yojana to Odisha’s farmers has also been hidden. Why?”

“As per the letter of Union Minister Agriculture if the orders for payment were passed by the Technical Advisory Committee (TAC) on 7th November, 2022 then why did the Hon’ble Union Minister tweet on 15th November, 2022 claiming he is now directing insurance companies to pay to the farmers of Padampur and Bargarh? Wasnt it for optics and only for electoral gains to grab attention in a poll-bound Padampur? ” asked Dr Patra .

He further stated ” One aspect is clear that the falsehood of the Centre on the FasalBima has been caught by the farmers of Padampur and Odisha. Now the farmers of Padampur and Odisha know that the PMFBY as the name goes is naturally of the Centre and only the Centre can take the final decision on any claims as admitted in the Centre’s letter today and only they can direct the insurance companies to pay the FasalBima. The state has no role as far as the final decision is concerned.  After regular follow up from Hon’ble CM Shri. Naveen Patnaik and pressure from the farmers, the Centre was forced to release the Fasal Bima to the farmers. If it could do it now, why not months back?”

Dr Patra warned that, The farmers of Odisha are extremely angry with this double-standards and falsehood of the BJP and are going to give a fitting reply in the upcoming Padampur by poll.

NHRC notice to the Government of Punjab

NHRC issues notice to the Centre, States and UTs over the reported high death rate of…