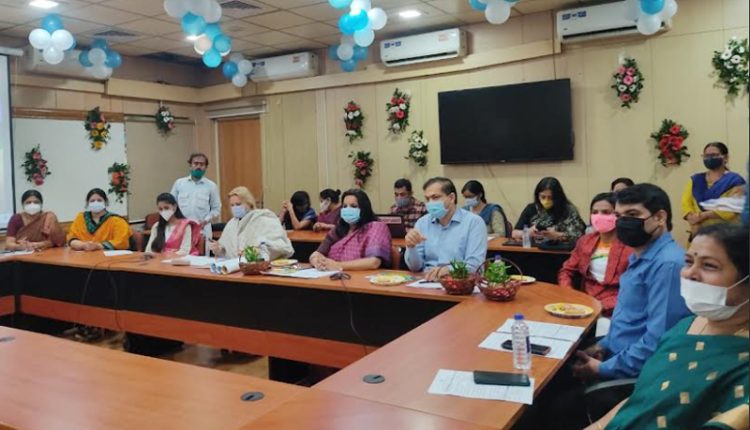 Bhubaneswar(Kalinga Voice) : With an aim to encourage adolescent boys and girls to become change agents of the society, a State level Convention of adolescents was organized by Women & Child Development (WCD) Department of Govt of Odisha in collaboration with UNICEF and UNFPA on the occasion of World Children’s Day on 20th November.

Around 3000 adolescent boys and girls along with several dignitaries participated in the convention which also saw the launch of a logo for ADVIKA – a program launched by the Women and Child Development Department (WCD), Government of Odisha last year to empower the adolescent girls with life skills. The program is now expanding to include and educate adolescent boys for greater gender equality and equal opportunities.

The event commenced with the welcome address from Director, WCD Department, (IAS) Shri Aravind Agrawal. Congratulating the team involved in the implementation of ADVIKA which has now completed one year, Minister, WCD Department, Tukuni Sahu stated, “We have successfully brought in every Anganwadi Centre in the state for ADVIKA to ensure that this program reaches out to every adolescent. So far around 10 lakhs of adolescent girls have benefitted from ADVIKA and efforts are being made to reach more. As a result of ADVIKA interventions, many child marriages have been stopped and many villages are now child marriage free.” She also said the Ashirbad Yojna and other proactive programs of the Odisha Government for children and adolescents are working to support disadvantaged children, orphans, minimize dropout rates, encourage girl children for education, school transformation, and encourage adolescents to become agents of change for social transformation.

Interacting with adolescents, Anu Garg Principal Secretary, WCD Department said, “To make the society child marriage free, adolescent boys and girls should join hands and come together as agents of social changes. Not only girls but also boys should be part of ‘ADVIKA’ to stop social injustice against adolescent girls. ‘Sakha-Bandhu’, peer leader group is intended to closely work with ‘Sakhi-Saheli’ to bring the desired changes.” She also announced annual awards for best performers among ‘Sakhi-Saheli’ groups, ‘Sakha-Bandhu’ groups, Anganwadi workers, and adolescent groups to be conferred at the annual state level convention of adolescents.

Addressing the virtual convention of 3000 plus adolescents and all functionaries about the purpose of ‘ADVIKA’, UNICEF Odisha Field Office Cheif, Dr. Monika Nielsen said, “Young people and adolescents can bring about change no matter where they live. They have the right to participate in the decisions related to their lives and futures. For this to become a reality, they all should be given the opportunity and platform to represent themselves. ‘ADVIKA’ is one of such unique and convergent platform. It has the potential to ensure effective and systematic lessons to empower adolescents with necessary life skills and to prevent any kind of violence against them. We have seen how Advika has had a positive impact in its first year. We would encourage all adolescents to stand up for yourselves and explore all opportunities that lead to a better future.”

State Coordinator of UNFPA, Md. Nadeem Noor said, “Adolescents can bring about change as they have a natural power to raise their voice in society and improve life skills. With the active participation of adolescents, the next 10-15 years will hopefully be different for them. This age is the right time to start. By joining the ‘ADVIKA’ program, adolescents can prepare themselves for challenges to come and can become committed to take things forward”.