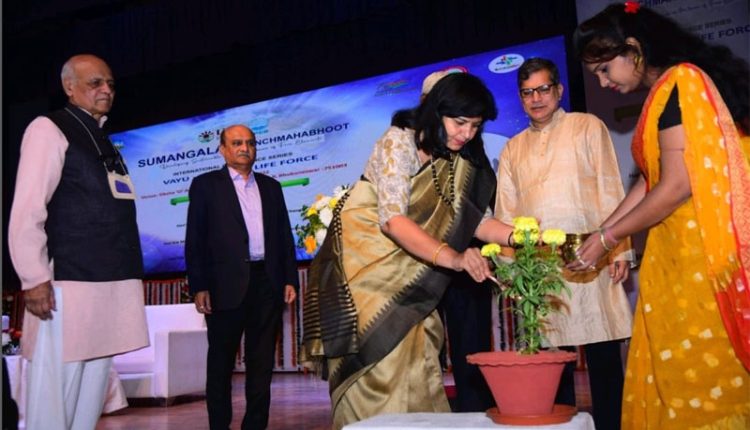 Bhubaneswar: The 2-day International Conference Series on Vayu: The Vital Life Force in Bhubaneswar concluded today at Bhubaneswar in the campus-2 auditorium of Sikshya O Anusandhan University. The conference, organized as a part of Azaadi ka Amrit Mahotsav, intended to disseminate Bhartiya thought to tackle the environmental crisis plaguing the world today. Smt. Aprajita Sarangi, Member of Lok Sabha from Bhubaneswar addressed the valedictory session this international conference,
In recent times, air pollution has emerged as a major issue threatening human civilization. While the Government of India has taken various steps for improving air quality in the country, it is important to integrate different schools of thought on environmental protection including those from modern science and traditional knowledge. The conference focused on a variety of issues ranging from scientific discussions on climate change & pollution control to enriching our understanding on air quality from ancient scriptures & texts.
In her valedictory address, Smt. Aparajita Sarangi said that the youth today have a vital role to play in the development of the country, and need to engage more with nature, and that their efforts would serve as a source of inspiration and enthusiasm for everyone.

MP Smt. Sarangi noted that India has assumed presidency of the G20 from 1st December 2022, and climate change is a major issue that would crop up in G20 discussions, and that the entire world is now looking up to India, under the leadership of the Hon’ble Prime Minister, Shri Narendra Modi, for leading the world in the battle against climate change.
Speaking at the occasion, Smt. Sarangi said that organizing this conference was important as fruitful discussions took place in the 6 technical sessions held during the conference and awareness was also generated among the participants and public at large on the need for environmental protection. The feasible suggestions that have emerged from the conference may be duly considered and implemented in right earnest.
She noted the importance of maintaining a balance in the world and said that the logo of G20 2023 reflects India’s pro-planet approach to life, and that the theme of India’s G20 Presidency, i.e. “Vasudhaiva Kutumbakam” or “One Earth. One Family. One Future”, affirms the need to work together to protect the planet. She laid emphasis on the need to listen and learn from all, to keep improving and realise our potential to the fullest.
She congratulated MoEF&CC, CPCB, SoA and all organisers for successfully organising the event.