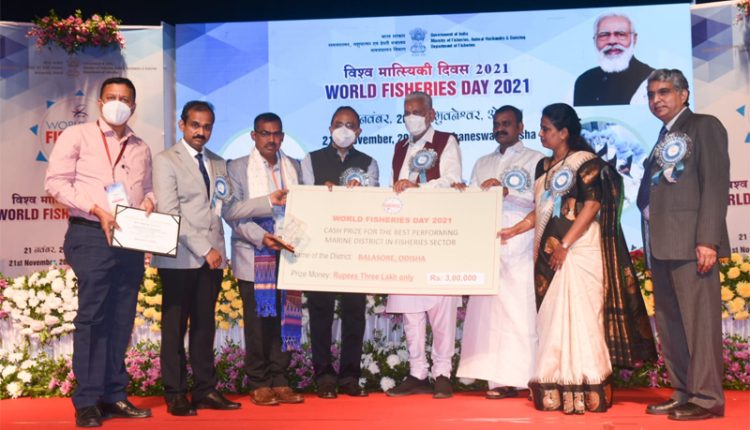 Bhubaneswar (Kalinga Voice): Fisheries sector in Odisha achieved another milestone when the state received yet another prestigious national level fisheries award on the occasion of ‘World Fisheries Day’ 2021 in a ceremony organized by the Ministry of Fisheries, Animal Husbandry & Dairying, Government of India, at Bhubaneswar wherein Balasore District received the “Best Marine District” Award in the country.

Every year, World Fisheries Day is celebrated on 21st November to recognise the contributions of millions of fisher folks, fish farmers, and people involved with fishery trade across the globe. This day highlights the importance of healthy ocean and inland aquatic ecosystems to ensure sustainable stocks of fisheries in the world.

Fisheries and aquaculture is playing major role in multiplying farmers’ incomes, enhancing livelihoods, creating gainful employment, providing nutritional security and contributing to export earnings in Odisha. Government of Odisha has kept a high priority for the fisheries sector and placed fisheries & aquaculture sector as one of the growth propellers for over 15.89 Lakh fishermen including farmers, women SHGs youths and entrepreneurs.

Odisha is immensely contributing to the fisheries development in the country with its huge fisheries resources which includes 480 km of marine coastline, 4.18 lakh hectares of brackish water bodies and 6.86 lakh hectares of inland waterbodies including rivers, ponds, tanks and reservoirs. Odisha is the 4th largest fish producing states in India with 8.73 lakh metric tons of fish produced during 2020-21 contributing to 2.33% of the state economy. Over last 5 years, Fisheries sector has grown at an average annual growth rate of about 13% in Odisha. Especially the inland fisheries sector has shown a spectacular growth, which is one of the best in the food and agriculture sector.

The demand of fish in Orisha is huge, since around 94% of 45 million population in Odisha consume fish. There is huge demand for Odisha fishery products in international markets such as USA, Europe, Japan, China, ASEAN countries and Middle Eastern countries. The seafood exports from the state has tremendously increased by 9 folds in last 20 years and reached Rs. 3,108 Crores with a volume of 61,000 tons during 2020-21.

The State Government though a wide range of incentive based schemes and programmes have attracted large number of farmers and entrepreneurs into inland and brackish water aquaculture. State Government spends around Rs 100 Crores per annum towards subsidy for farmers to take up new fish tanks for expansion of intensive inland and brackish water aquaculture. Through a liberal policy, long-term lease of Panchayat tanks are provided to women SHGs, and currently around 8300 women Self Help Groups are taking up inland aquaculture, under the flagship “Mission Shakthi” programme of the State Government.

The policy for leasing water area in reservoirs for undertaking Cage Culture fisheries was launched by State Government last year. Many youths and entrepreneurs have shown tremendous interest and enthusiasm and have installed and started Cage Culture fishery in Hirakud reservoir. The royalty received from leasing of the reservoirs is shared with the local Primary Fishery Cooperative Societies to take up fish stocking, purchase of boats & gear and other related activities.

Bio-floc fishery is a highly promising since it’s an Intensive fish production system and there has been huge interests from farmers and youths to set up such units; the Government of Odisha over 2 years have placed more than 40 Crore towards subsidy for encouraging Bio-floc fishery. State Government adopts a sustainable path in marine fisheries, giving equal importance to livelihoods of marine fishers and conservation of marine biodiversity including the endangered Olive Ridley Turtles. Accordingly, infrastructure development of the Fishing Harbours and FLCs are taken up on priority.

To promote fish consumption for nutritional gains among children and pregnant mothers in the state, The State Government under the Women & Child Development Department in collaboration with the Fisheries Department have successfully piloted inclusion of fish in Anganwadi supplementary nutrition program in Mayurbhanj District, through introduction of dry fish and fish powder.

With all these enabling policies and schemes, the State Government is accelerating the growth of the fisheries sector in the State with an objective of bringing in blue revolution.