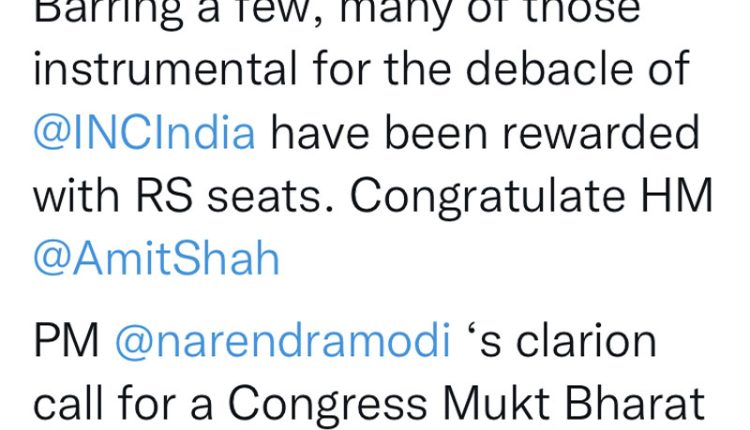 Bhubaneswar: Besides several leaders of the Indian National Congress (INC) who have expressed their displeasure on the candidate list released by AICC for Rajya Sabha Election ‘2022, former Congress leader Shri. Suparno Satpathy took to Twitter to take a dig.
Pawan Khera the national spokesperson of INC too took to Twitter to express his displeasure saying “‘शायद मेरी तपस्या में कुछ कमी रह गई’(“Maybe there is something missing in my penance”

Former cine star turned politician Nagma also expressed her displeasure over Twitter by saying “हमारी भी १८ साल की तपस्या कम पड़ गई इमरान भाई के आगे (“Our 18 years of penance also fell short in front of Imran Bhai)।” she also tweeted “Sonia Ji, our Congress president had personally committed to accommodating me in RS in 2003/04 when I joined Congress party on her behest. We were not in power then. Since then it is been 18 years, they did not find an opportunity. Mr Imran is accommodated in RS from Maharashtra. I ask am I less deserving.”
Shri. Satpathy went a step ahead to congratulate Home Minister Amit Shah. In a tweet Shri. Satpathy says ” Barring a few, many of those instrumental for the debacle of @INCIndia have been rewarded with RS seats. Congratulate HM @AmitShah PM @narendramodi ‘s clarion call for a Congress Mukt Bharat seems very much on track”